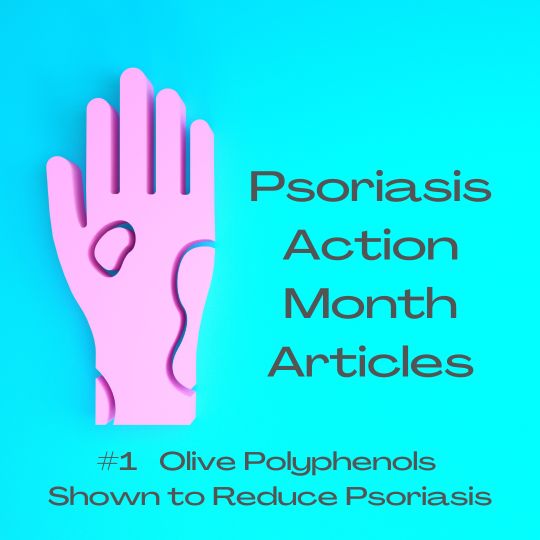 Polyphenols derived from olives have been the subject of increasing research in treating disorders caused by oxidative stress and inflammation. Olive oil, which is high in phenolic compounds, has received a lot of attention recently. There’s evidence that olive polyphenols have a potential, positive use with problem skin conditions, such as psoriasis and eczema.

Psoriasis is a chronic inflammatory skin disorder that affects up to 2% of the global population and is triggered by the immune system. Currently, topical medicines such as corticosteroids and Vitamin D analogues, phototherapy, and systemic treatments aiming at slowing down the cell cycle, namely keratinocyte (the predominant cell type of the epidermis) proliferation, are the most common treatments[1].

Eczema (atopic dermatitis) is caused by a combination of immune system activation, genetics, environmental triggers and stress. If you have eczema, your immune system overreacts to small irritants or allergens. This overreaction can inflame your skin. This skin condition produces changes in epidermal barrier function and the appearance of skin lesions ranging from mild erythema (redness) to severe lichenification (thickened and leathery skin)[2]. Topical corticosteroids may be used in conjunction with hydration to treat the condition, although they can have side effects.

Indeed, there is a greater need for effective yet risk-free treatments. An olive polyphenol-based nutraceutical/cosmeceutical augmented with vitamin A, riboflavin, and biotin was the subject of a pilot randomized placebo-controlled double-blind trial to determine the product’s efficacy.

What are polyphenols, and why are they used?

Many health benefits have been linked to phytochemicals present in fruits and vegetables, with polyphenols being of particular interest due to evidence showing they can reduce oxidative stress and inflammation, which is thought to be the source of many diseases.

Olives and olive oil are rich in polyphenols having intriguing biological properties [3]. Medicinal properties include cardiovascular disease prevention, help with metabolic syndrome, anti-inflammatory effects, and wound healing [4]. Furthermore, olive oil’s use in the diet and externally on the skin has been shown to protect against skin ailments. Its principal ingredient, oleuropein, breaks down into oleanolic acid and hydroxytyrosol (HT), which produce beneficial impacts on human health.

How do olive polyphenols work?

Polyphenols have antiproliferative properties which helps reduce inflammation in the body.

When inflammation occurs, polyphenols increase the production of IL-8, a substance produced by keratinocytes (the predominant cell type of the epidermis.) It increases the amount of neutrophils (type of immune cell) at the site of infection and thus enhances immunity[5]. Thus, polyphenols play a vital role in the innate immune system in early inflammation[6].

In patients with moderate psoriasis and eczema, a cosmeceutical/nutraceutical formulation based on olive polyphenols improves the manifestations of these diseases. Psoriasis and eczema could be helped with supplements that enhance the immune system. Olive polyphenols could be beneficial in the mild, and the early stages of a moderate or severe condition, as they improve the epidermal barrier effect and prevent inflammation by stimulating repair mechanisms.